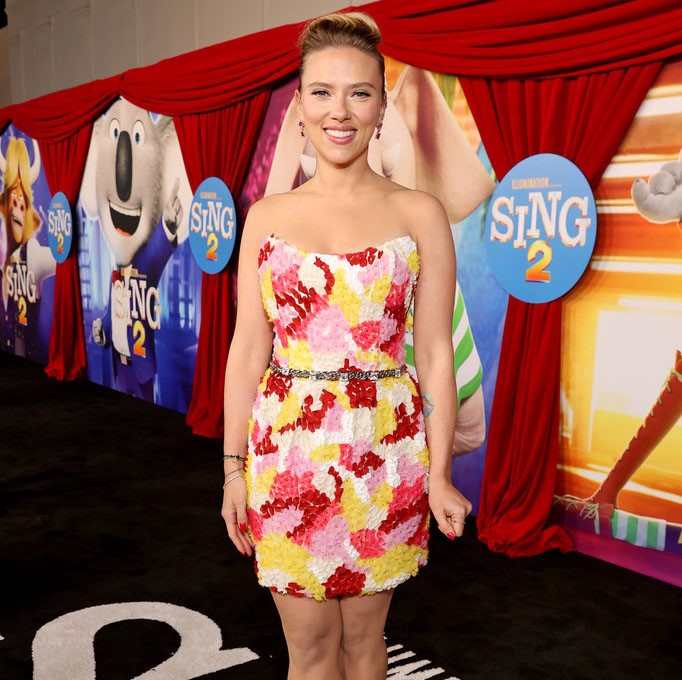 Discover Egypt brought you an exclusive interview with Hollywood’s iconic star Scarlett Johansson to reveal all about the second sequel of the animation movie Sing 2. Playing the voice of Ash, the rocker porcupine, Buster Moon and his friends must persuade reclusive rock star Clay Calloway to join them for the opening of a new show.

Sing was a special film that connected with audiences all over the world. Why do you think that happened?

Because I think the film has a multi-generational appeal, the characters are very endearing, and it has a lot of humor. It is also very exciting and has this incredible soundtrack. In the story, there is a big problem, but we go about solving it, and you just want these characters to win.

Were you excited about coming back to work on this sequel then?

Yes, I have been waiting to work on this sequel for the last four or five years! I am always happy to talk about something I have worked on, but it is great when you know there is this kind of built-in enthusiasm for it and that people are looking forward to seeing it. So, it was exciting to be a part of something that was highly anticipated.

You play Ash, the rocker porcupine. How do you see the evolution of your character throughout these two movies?

In the first movie she has this kind of relationship that is holding her back and still hasn’t found her own voice, as she is sort of living in the shadow of her boyfriend, who is kind of a jerk. But then she finally gets enough confidence to shed him, goes on a journey of self-discovery and finds her voice. So, she deserves a seat at the table, and it’s an inspiring journey to watch her come to that place. In Sing 2 she uses that experience to help another artist rediscover his voice and find his own identity and footing again after a huge loss. I think that’s a very admirable act and that she goes on a very inspiring trajectory.

I like her dry sense of humor and how good she is in a crisis situation – which is something I can relate to! I think Ash is somehow the glue that holds the chaos together, and I like that about her too. She is small but mighty!

The story of Ash and the reclusive rock legend Clay Calloway is beautiful and key to the film. Why do you believe she is the right one to help him?

I think they both have a love of music and recognize in the other one a true artist. So, they have a mutual respect for each other. Ash understands Clay and his music – which opens the door a little bit, as he is so guarded. That’s how she gets her foot in a little way.

Can you talk about the significance of the U2 song Stuck in a Moment You Can’t Get Out Of that you perform in Sing 2?

That is one of my favorite songs since high school! And it’s interesting because it’s kind of reinterpreted in this film and takes on a different meaning. The Clay Calloway character is grieving and hasn’t really been able to take the next step, as he is stuck in his grief and can’t see the future without his beloved late wife by his side. So, I believe the song is perfect to explain that moment, as the words take a new meaning and speak about overcoming fear and how you move on after a devastating loss.

And how was it for you to perform U2 songs and even sing a duet with Bono?

My 13-year-old dream come true was to sing a duet with Bono. Never in a million years would I have imagined that! Just yesterday he told me that he played it for the band, and my mind was blown away. It’s very surreal…

Sing 2 is populated by very relatable characters and manages to connect with audiences of all ages.

The characters just seem so well flushed out and feel so real – even though they are animals – that you root for them and want them to win. So, it feels multigenerational because of that.

What do you like about the whole experience of voicing an animated character?

I have always enjoyed voice acting, and I have done a lot of it in different ways. As an actor you kind of have two tools: your physicality and your voice. And when you take one of those away suddenly you are hyper aware of what you don’t have and focus on the nuance of that one tool. So, acting this way is different and has its own challenges, but I like doing something that feels like it’s some kind of puzzle you have to solve.

And what can you say of writer/director Garth Jennings, who you work with again on this sequel?

That he is the best partner to do something like this with because he has plenty of suggestions and lots of enthusiasm, and he knows when he has what he wants. Garth Jennings is a great actor’s director and a wonderful writer. I just love working with him because he is a brilliant creative mind, so generous of spirit, emotionally available, and enthusiastic. Garth thinks out of the box and has a delicious brain, so I was excited to play with him again. He is a wonderful collaborator.

Sing 2 has beautiful messages and feels like the right movie to enjoy now, especially after what the world has been through due to the Covid-19 pandemic.

It was interesting to record this during the quarantine time because we were all separate from one another. It was the only opportunity for me to kind of perform during that time, and I really looked forward to those sessions because it was just reassuring to know that we were making something for the future. It helped me dream about what the movie would end up being, and now here we are celebrating it. Sing 2 is so much about overcoming personal obstacles and finding a united voice, so I think it’s the right time for it. It’s serendipitous that way.

Mariam Mohsen Got a Heart that Sees Miles Ahead