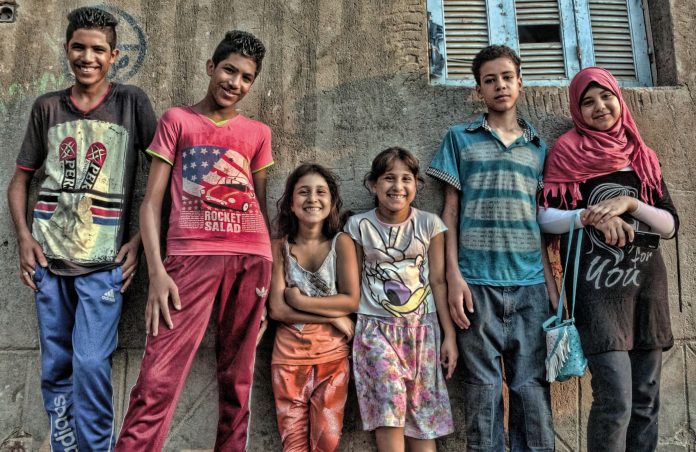 The people of Abu Attwa, a small suburb located in the outskirts of Ismailia, are arousing the media’s curiosity because they are getting the biggest number of twins in the country.

When Said Yasin landed in Abu Attwa, a small village located in the outskirts of Ismailia, he had just got his first boy; a few months later his wife got pregnant, but this time her pregnancy appeared uncanny. The size of her belly was much bigger than usual and when the married couple visited the doctor they were told they’re having triplets. Like many of the Abu Attwa residents, Yasin wasn’t bothered by these multiple pregnancies until he knew it was possibly engendered by living in Abu Attwa.

There is no exact date pinpointing the beginning of the phenomenon, but, amazingly, many of those who live in the place claims they didn’t experience twin births prior to landing in the village that has witnessed waves of migrations during the last 40 years. Married couples there get twins, triplets, and sometimes quadruplets in one pregnancy. One family could get twins twice with several other normal births, a phenomenon that has attracted attention to the village. With a population of 350,000, Abu Attwa features some 500 twins that belong to 100 families, according to news reports. Specialists in the neighborhood highlight 20 cases of twin births in Abu Attwa on average every year. In a space of 10 meters, one can detect no less than 20 twin brothers or sisters. The residents are originally migrants who hailed from different parts of Upper Egypt, Sharqia, and Palestine. People belonging to these three places are known for their passion for extended families and this is why they like to get many children.

That one would immediately come across twins when landing in Abu Attwa is just an illusion. Some of the residents aren’t even aware of the presence of such a big number of twins in their neighborhood. There is always a need to look for someone belonging to one of the 100 families who make up the phenomenon, but this isn’t difficult.

The village is divided into three parts: El Berka, El Gameya, and Zaghaba. No one at El Berka would ever tell you he has even heard about the Abu Attwa twins. As you walk on to El Gameya, you will be told that half the families are living there as opposed to Zaghaba that makes up the peak of the phenomenon. Desperate to come across any guide, Discover Egypt ran into a butcher who toiled at a stubborn leg of a lamb.

Ibrahim who interrupted his work said he had a twin brother who died when he was a child. “But the loss has been redressed after God gave my father another twin from a second marriage. Those are my brother and sister Abdou and Hend, now 10,” he relates. “We aren’t the only twins in the family, for my aunt has Nada and Maryam, now 17 and my uncle has Mohamed and Ahmed, but those aren’t identical twins. I also have twin cousins who are 17. The list is endless,” informs Ibrahim smilingly. “Should I call you more twins from Gameya?” asks Ibrahim, meaning to accentuate my surprise.

We realized immediately the butcher is the key to the twin exhibition.

Responding to his call, Mohamed and Ahmed showed up at his shop in less than ten minutes. They are having private classes in preparation for the new school year. The twin brothers like to do everything together. They have the same friends, playmates, and hobbies, but amazingly both are also showing a passion for butchery.

They accompany Ibrahim every week to the abattoir and provide him help. All of a sudden, a child who looked like them came in; “This is Anas,” says Ibrahim introducing the child, “He’s Ahmed and Mohamed’s third brother, they were four in one belly, each two enveloped in one bag,” says the butcher. Anas’s twin sister died a short while after she was born. Anas looks a bit different from his twin brothers. He joins them from time to time but his identical brothers seem to be more akin to each other. “This is true, an identical twin is very close, even closer than each to his or her mother,” says Ibrahim.

“I had a twin brother called Alaa, who also passed away when we were babies,” recalls Ibrahim sorrowfully as we ride a toktok to his uncle’s house in the El Fisha area. He goes on to say: “The twin is one inseparable brain and soul; even when one dies his soul would remain suspended and visit the other every day.  My dead brother Alaa comes to my shop almost five times every week. I feel his presence which sometimes comes in the shape of a cat. He eats a little piece of minced meat, but he doesn’t eat anything the next three days. Apart from our case, twins are generally subject to incarnation. Anas also tells me his dead twin sister visits him from time to time.”

Ibrahim continued to miss his dead twin brother until his father got other twins, Abdou and Hend from a second marriage. ” We are close to each other; we’re the same soul, and I feel more responsible for them than my father. I get them the school uniform, take them to their classes the first school day, and listen to their complaints. They have made up for the loss of Alaa who I miss very much.” He stresses that there is always a big mystery surrounding twins. “Even the non-identical ones do have a special kind of behavior; when one is inclined towards the father, the other is close to the mother. Each will have the same habits, behavior, and viewpoints of one of the parents,” says Ibrahim.

As we arrive at his uncle’s house we meet his twin cousins Maryam and Nada, they were fighting. We turn to their mother asking her why her twin daughters are bickering when twins are supposed to love each other. “No,” she responds. “Twins start fighting with each other for petty reasons but no sooner do they finish fighting than they patch up.” But do Maryam and Nada get along together?

“Yes, like the majority of twins, we love each other very much,” says Maryam. She adds: “But we sometimes get annoyed due to cases of mistaken identity. Sometimes our colleagues in college mistake me for my sister. I am the younger; however, people think I am older because I am taller.” Nada steps in to interrupt our talk. “Eventually we will get separated once we get married and that will be the end of it. But we will always remain good and close sisters,” she says.

But what about upbringing and support? “That’s always a burden,” says Om Maryam. “With twins you’re stuck. May God Help those getting three or four all at once. They cry, need to eat, and be carried and lulled all at one time. A mother would, definitely, need help. As for their financial support, we receive no special donations in this place for twins. However, we believe God endows his blessings on twins. Usually, one of them prospers and helps the family, or because the family has twins, the father or mother will earn a lot of money in a way that often goes beyond all expectations.”

The phenomenon hasn’t yet been brought to the attention of specialists in the medical field. Some press reports quoted them as owing it to the consumption of mangoes yielded by the mango plantations in Ismailia. Others cited the minerals-rich water available in the area, or the consumption of fertility drugs. However, apart from Abu Attwa, twin births have generally increased countrywide, according to specialists.

Women, especially in rural areas, take these drugs in an attempt to consolidate their marriages by getting children in the shortest time possible. More often, the drugs activate ovulation as well as the splitting of the egg into two parts, both factors that cause twin births. Taking note of the practice, specialists are warning that twin births could be harmful to the health of both the mother and the newborns, but when the peak of these births has become phenomenal at Abu Attwa, there is a need to make use of it for medical purposes.

Can the twins at Abu Attwa flag off Egyptian research in the field of genes? The twins at Abu Attwa have taken medical and tourism officials by surprise, so much that not many are able to tell how to put the phenomenon to best use. It is not difficult but we need time and planning as well as sincere effort.

Note: This article was previously published in Discover Egypt Magazine in 2014

For more unique stories take a look at our Features!

A WHISPER AT THE HEART OF SOUTH SINAI; WADI AL WUSHWASHI

The Anecdotes Behind Hairdos in Ancient Egypt