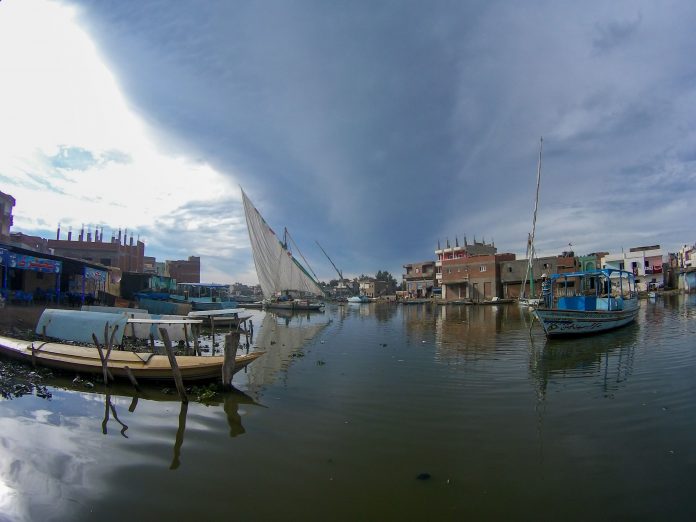 You may think Egypt is all about the historical sites, or the magical beaches, but no, it does not stop here or there. Egypt is full of hidden gems, and El Shakhlouba Village is at the top of the list!

Located at the southern coast of the beautiful Lake of Burullus within the Nile Delta, this small village is such an overlooked potential of an amazing natural attraction. With quiet shores and a natural fertile environment, El Shakhlouba is divided into two parts, the Eastern bank, and the Western bank, separated by a waterway connected to Lake Burullus. With boats of various sizes on both sides of the stream, the scene is very similar to the area of Al-​​Max in Alexandria, and to a traveler’s eyes,  if only the piles of garbage vanish, it looks as close to the Italian city of Venice.

El Shakhlouba is inhabited by around ten thousand residents, most of whom work in the fishing profession and fish farms. It has a commercial activity for fish selling through auctions and is famous for manufacturing fishing boats. Boats, in general, and fishing, in particular, are still a great deal for the inhabitants of the village; it represents their identity, history, and their harsh present.

The village has two entrances; one of them is through the rural roads of delta countryside governorates and takes around 3 hours’ drive; while the other is through sailing the Burullus lake. Once you reach the village of El Shakhlouba, you rent one of the modest fishing boats available on its shore. Crossing through the waters of Lake Burullus for a distance of 150 meters, you will be pleasantly surprised by the view of two houses on two adjacent islands in the middle of the lake.

The story of the two houses dates back to earlier years, where they were used as a fish market ring. In recent years, the decision was made to remove them; but because of their picturesque nature, the residents refused to implement the removal decision for nearly five years or more. Eventually, the market was moved to another place and the two houses were kept for visits.

The view of those two islands at the heart of the lake with their colored houses is quite magnificent, especially during sunrise and sunset, and is the reason they attract the type of visitors who seek uncommon nature encounters.

So, next time you think of having a unique one-day trip, grab your camera and head to the peace and tranquillity of El Shakhlouba village…

This article was originally written by Rehab Ragaee

Edited and revised for digital publication by Noha Kandil

Check out our Destinations’ section for more hidden gems!

A WHISPER AT THE HEART OF SOUTH SINAI; WADI AL WUSHWASHI

The Anecdotes Behind Hairdos in Ancient Egypt