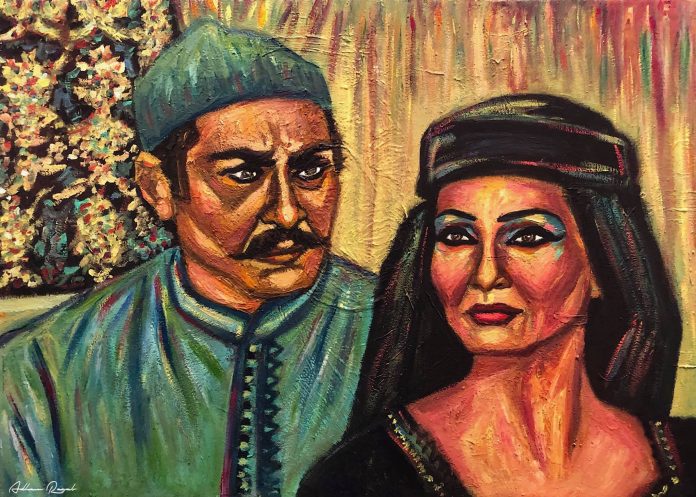 Amira Tharwat talks to aspiring artist Adham Ragab about his artistic portraits. The Alexandrian born artist reveals all about his passion for portraying iconic scenes from Egyptian movies, the tools he uses, and the artists he aspires to.
Adham Ragab, an Alexandrian born artist, who started his passion for art at the young age of 5. He started practicing on pencil portraits during college, where his art started developing.

During late years of college, he tried to paint by water colours as a start to introduce new art materials then, acrylic, charcoal and lastly, oil colours, which he loves the most as he has been painting with oil colours since 2017 till now. He published an art page on both Facebook and Instagram in 2018 when he felt that his artistic portraits should go professional.
He used different pencil degrees for illustrating and oil colours for painting, combining them together on a digital background for designing posters graphically using photo art apps.

Adham’s style is mixing fashion sketches with portrait paintings, trying to innovate old posters and recreate cinematic master scenes with new versions maintaining the vintage spirit in each poster as he merged handmade art with a little touch of graphic design for each artwork to choose the suitable original titles.

About his obsession with Egyptian old movies Adham said “I’m addicted to the magic of Egyptian cinema, I am a good viewer for Egyptian movies of 1950s, 1960s, 1970s till the first ten years of 2000s. The idea came when I was obsessed with the Egyptian Cinema golden years, and my dream to see new inspiring Egyptian movies like the past ones. I had a great nostalgic feeling, which made me prepare for the project in December 2019 listing the old and new movies that I picked either I fully watched or got inspired with a film’s specific scene”. His main reason for that project is to be a reference to Egypt’s cinematic history and a great propaganda for the Egyptian cinema and heritage so, these painting could be exhibited permanently.

Adham says that he adapts contemporary art school in which he likes the connection with humanity feelings through portraits especially Egyptian Middle Eastern Culture and Heritage Art Section, besides drawing his own designed characters and grabbing them into variety of stories.